Listed these on Etsy last night. This whole getting prepared to move dealio is really consuming all my time and thoughts. By this time next week, we’ll probably be driving out of Cali heading east to Colorado, etc.
So I decided to make this listing w/ Free Shipping. I’m too lazy to change the rest of my listings so only this one has the free shipping, but anything else I have the time to list before next week will also have free shipping.
Monday morning will probably be the latest my Etsy shop will be open before it has to be shut down for the move on Wednesday afternoon. Depending on how smooth the drive ‘cross country goes and how easily we find a house will determine when the shop opens again.
I was pleasantly surprised to see how the somewhat abhorred Translucent Yellow looks fumed- note the pretty pink flash. I didn’t etch since I wasn’t sure if any of the color would stay, let me tell you it makes me itch when I don’t etch beads, lol. 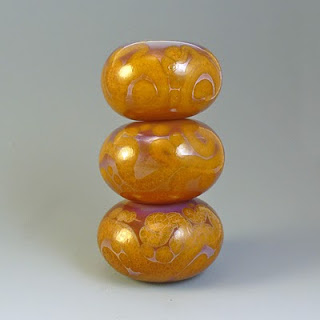 Double Helix has done it again with their recent batches of odd-lot silver glasses. I wasn’t able to get nearly as much as I’d have liked since we’re about to move and hubby has been keeping his eagle eye on me so I don’t buy anything thru the mail, lol. I did get some Aether which is absofreakin’lutely amazing, it’s like butter and melts so clear w/ no scumming or boiling. I have two of the KA oddlots to show, KA 356:

I love the pinks I was able to get- it wasn’t difficult- but it easy to overwork or overheat while encasing that causes this glass to go more gold- which can also be interesting. I made the base bead in KA 356, let it strike slightly, then put it back in a neutral flame (which caused some slight reduction and streaks which reminds me of how Ekho works). At this point I turned down the oxygen and turned up the propane so the candles were about an inch and a half, and quickly flashed the bead until I saw the iridescence. Let it cool slightly and encase in Aether. While encasing, be careful you don’t work too hot, slow and cool wins the race w/ this glass. 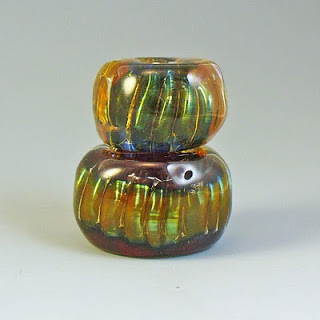 My talented friend, Hayley, has recently posted pics of other odd lots- plenty of eye candy, go check it out 😉